Book Review: The Gospels: a new translation by Sarah Ruden

Review by Peter Koeppel, a member of Trinity Memorial Episcopal Church in Binghamton. 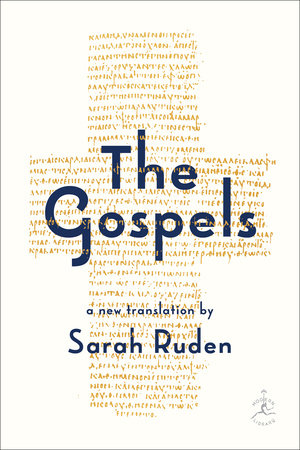 Have you ever had reason to consider how your favorite New Testament translation came into being? Would you be surprised to learn that portions of its history might resemble the children’s game of telephone? And that it has not been impervious to serving both clerical or secular purposes? Let’s unpack that.

For most of its history, the oldest New Testament scriptures accessible to scribes and translators have been in (ancient) Greek. Linguistically speaking, these were already one step removed from the language used “on the ground” by Jesus, his disciples, and his followers. Next, these Greek translations were translated into Latin. The Latin versions, the best known of which is probably the Vulgate, became the dominant versions used in Western Christian Churches. But there wasn’t just one such version or copy. Copies were made entirely manually and some errors unavoidably found their way in.

As the vernacular translations were accessible to laity, they became not just religious texts, but also needed to serve governance and political aims of the church and worldly hierarchies. Here, we encounter intentional alterations in the translations, compared to texts accessible to the translators.

One of the most consequential alterations added just one word to the Pauline acknowledgment that faith leads to justification: Martin Luther added the word “alone:” “…faith alone…” Luther was well aware that he changed the meaning of that phrase, and explained his doing so by stating that the connection between faith and redemption need to be made especially clear.

All of this makes a new translation of the four Gospels by Sarah Ruden so exciting. Ruden is an experienced translator of old Greek texts, and she goes back, where possible, to old Greek texts as the basis for her translation of the four Gospels, skipping the intermediate chain of Latin translations and transcriptions. This method does not entirely eliminate the chain of translations, but Ruden manages to significantly shorten the chain, and avoid at least some of the intermediate tweaks.

Another challenge faced by all translators is how to translate concepts and constructs, which exist and are familiar in one language, into another language that may not have an equivalent concept or construct. We’ve seen that a lot last fall with references to the Danish hygge. Articles wrestling with the impossibility of translating hygge into English sometimes mention the German word (and concept) Gemütlichkeit, which similarly defies translation into English. Those two examples are “everyday” words in their native languages. How much harder becomes this task of finding the just right English word to match an old Greek word, when we are dealing with the unknowable–with concepts, ideas, and insights which defy mere human knowledge. The translators of the King James Version, which is beloved by many of us for the powerful and at times poetic language in which it presents the Good News, engaged in intensive correspondence with theologians on the European continent when wrestling with the challenges inherent in their translation effort. When wrestling with the untranslatable, they created words like “loving-kindness.”

Sarah Ruden’s approach never veers from acknowledging these challenges. Indeed, the book starts with a frank discussion of the history of Bible translations, copies, and transcriptions, of the challenges in translating these extraordinary texts, and continues on to discuss specific challenges word for word, only then offering her translation.

To find out, I encourage you to get your own copy: The Gospels – A new translation by Sarah Ruden.