The Rev. Megan Castellan has been called to serve as rector of St. John’s Church in Ithaca beginning March 25, 2018.

Castellan comes to the Diocese after serving as Assistant Rector of St. Paul’s Church, Kansas City, Missour, and the Diocesan Network Coordinator for Youth in the Diocese of West Missouri. Prior to that, she also served in Flagstaff, Arizona and Virginia Beach, Virginia.

Her writing has appeared in publications such as Episcopal Cafe, Fidelia’s Sisters, The Toast, McSweeney’s, and her own blog, Red Shoes, Funny Shirt. She has appeared in print alongside the presiding bishop in his book Following the Way of Jesus and in the liturgical reference Planning for Rites and Rituals.  Most notably, she blogs for Lent Madness, so should you have strong opinions on the elimination of your favorite saint, please let her know.

The Rev. Paul Frolick has been called to serve as rector of St. Matthew’s Church in Liverpool as of April 16, 2018.

Frolick comes to the Diocese after serving as the rector of St. George’s Church in Hilton, New York in the Diocese of Rochester. A musician, Frolick was the director of music and program assistant at Christ Episcopal Church in Pittsford, New York prior to his ordination as priest.

Paul brings to St. Matthew’s and the Diocese the gift of his involvement with the College for Congregational Development, a leadership program for lay and ordained individuals. The Rev. Trula Hollywood has been called to serve as part-time priest in charge of St. Paul’s Church in Owego as of January 1, 2018.

Hollywood comes to the Diocese after having served several churches in the Diocese of Bethlehem. A resident of Sayre, Pennsylvania, she is also employed as a Quality & Compliance Specialist for the Commonwealth of Pennsylvania.  Her background in social services has focused mainly on issues involving older adults and specifically issues with abuse and neglect.  She’s also had several years of administrative experience in non-profits and government agencies.

The Rev. Dr. Howard “Doc” Whitaker has been called to serve half-time as interim priest in charge of Grace Church in Elmira as of April 6, 2018.

A resident of Scottsboro, Alabama, Whitaker will divide his time between the two states. He has served churches in Eastern Kentucky, Tennessee, Alabama, the Eastern Shore of Maryland, Western New York, and the Diocese of Newark, and is a Board Certified Chaplain (Retired) of the Association of Mental Health Clergy and the Association of Professional Chaplains.

There are no new calls within the Diocese since the previous Transition Ministry Update. The Question Before Us: Gun ViolenceBishop DeDe Duncan-Probe, Featured, Updates 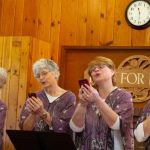