What we have in “commons”

Image above: The Susquehanna River, which flows through the southern part of our Diocese. Photo by Nicholas A. Tonelli via Wikipedia – CC BY-2.0, Link.

Much of the world knows the concept of a commons:  a shared resource—a pasture, a water flow—which is managed by common agreement fairly, to benefit all, and to enrich no-one over anyone else. Commons is an English term, of course, but we can trust that other languages and cultures recognize the approach to sharing and managing a shared resource, no matter what they call it.

Some observers of commons over time have noted that some commons have persisted for centuries, while others contend that human nature will eventually lead to somebody acquiring more than their fair share of the commons, pushing other beneficiaries out, and perhaps into harder survival. That pattern is known as the Tragedy of the Commons.

And that’s with commons we can easily see, such as a shared pasture. It becomes a bit harder when we talk about water: easy to see when we drain a reservoir or river, though a bit harder to figure out who took more than their fair share. And it becomes harder yet, when we look at a stream – we take water from it, and we return waste-water to it. And that might just a problem: let’s picture ourselves downstream from a major influx of wastewater. We may have to spend a lot of effort, and indeed money, to clean up the water which somebody else dirtied up, before we can use it ourselves. Would it be fairer to ask the parties responsible for the wastewater coming at us to pay for cleaning up their own mess, and us, likewise, to pay for cleaning up our own wastewater? In that world, everyone would pass on the water about as clean as they received it.

Let’s take it up a notch! What about air: it’s perhaps the ultimate shared resource: we all breathe it in, and we all breathe it out. Whatever we put into it, doesn’t just get blown someplace else (have we thought about what it will do there?), but it most likely will come around the globe back to us – diluted and spread out perhaps, but come back it will. And it’s so much harder yet, to figure out who put what into the air, what it may cost to remove it, and who should pay for it. The most curious aspect of air as a commons is that so many of us are willing to excuse those who “take” more of their fair share of this resource, and not ask them to carry their share of the burden to remove what they put in to begin with. Didn’t we learn to clean up after ourselves in kindergarten?

As water and air flow around our shared home planet, shared not just among people, but with every living being, do we ask how what we put into the air and water impacts the sacred web of life—which connects us and everything living? 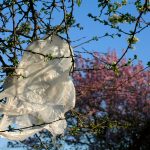